Mardi Gras 2018 invades New Orleans AKA “The Big Easy” over the next seven days, and the party doesn’t stop from now until next Wednesday.   There’s no doubt that N’awlins is more of a restaurant, dive bar, and live music venue city, with the lion’s share of the year-round party action centered around the infamous French Quarter and Bourbon Street.   And during the Mardi Gras Festival itself, daytime revelry will be spotted everywhere amidst the city streets of New Orleans: parades, colorful outfits, marching bands, dance trains, bead throwing, and public processions winding their way through the main arteries of the city from dawn ’til dusk… and then there’s little to no break before the freaks (and drunks) come out at night. 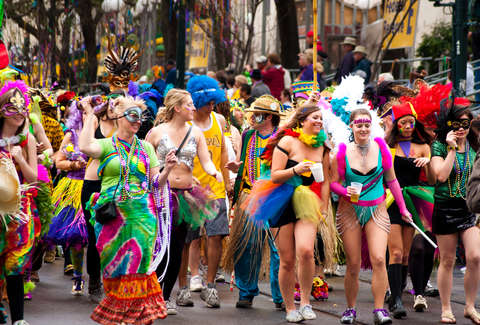 That being said, there are also a handful of vastly underrated nightclub options in the Crescent City – opulently decorated showrooms blasting laser-tinted smoke and pulsating music, where the world’s best hip-hop and electronic music artists stop in to perform as their national tour dates wind through the American South.  To be sure, New Orleans is and always will be an ultra-casual city – think shorts, flip-flops, and t-shirts with rude sayings on them – but sometimes you just want to dress up, be more fancy, sip adult cocktails, and bob your head to a beat… amirite or amirite?   Well, we’ve found found the best spots for you to do just that, and our app will make it easy to party hard in The Big Easy.  To celebrate our in-app launch of New Orleans, we give you our top picks for the best nightlife events for visitors and locals to celebrate Mardi Gras: 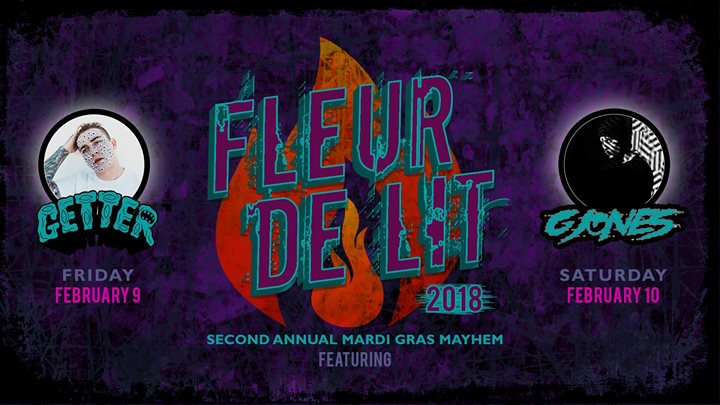 The Friday before Mardi Gras is considered early to party in New Orleans, as most of the locals are preparing parade floats and resting up for the days to come.  That being said, there are some events to whet the tourists’ appetites for partying on Fri-yays.    Winter Circle Productions & BASSIK Present Fleur De Lit 2018: Second Annual Mardi Gras Mayhem.  This is a two-day late-night electronic music festival at the revered New Orleans nightspot Republic, with the first night featuring San Jose, CA’s up-and-coming bass-heavy artist Getter.  Backup sounds by Klutch + Kidd Love. 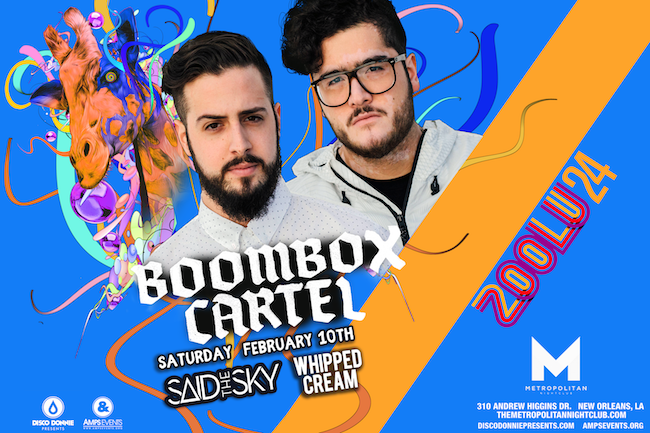 Mardi Gras may a bucket list vacation for many Americans, but for this particular 9-to-5 workday you’ll be grinding hard and sweating buckets.   Metropolitan NOLA has cobbled together a high-energy eight-hour electronic set headlined by brand-name duo Boombox Cartel.  Mexican born Producer/DJ’s Americo Garcia and Jorge Medina have quickly risen in fame among the EDM circuit and are due for a breakout 2018 in the electronic space with their unique low-end, heavy genre-blending sound. Their tracks are played all over the world by the likes of RL Grime, Diplo, Skrillex, and DJ Snake, and they have recently received shout-outs from Mad Decent, Billboard, Noisey, ThisSongIsSick, Complex, and many more. Their global tour has included sold out performances in the U.S., Canada, Australia, and Asia, including festival plays at Moonrise, Global Dance, Lollapalooza and EDC just to name a few.  Now Boombox Cartel brings the boom north of the border to the land of Southern Hospitality and one of our great nation’s best annual party atmospheres. 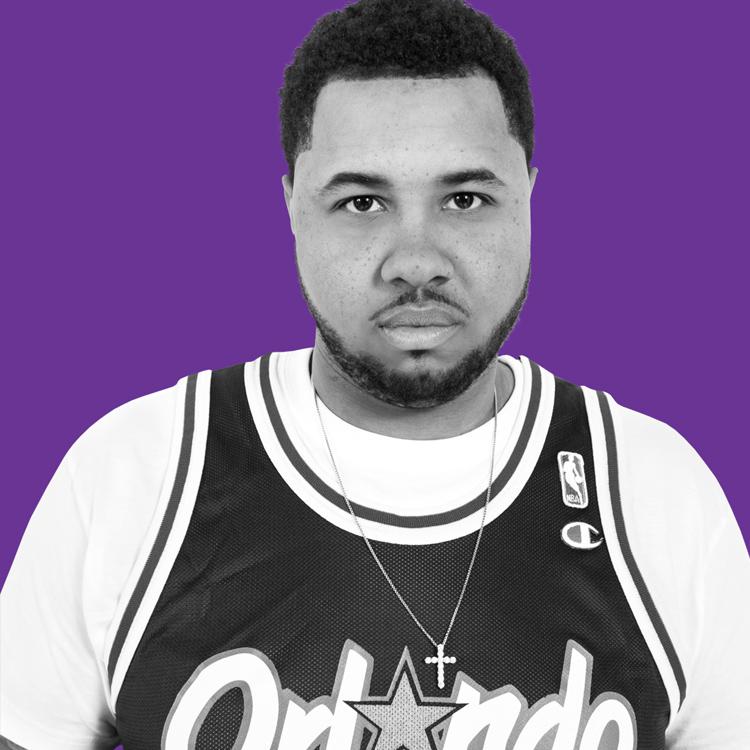 The local organizations responsible for throwing the world-famous parades on each day of the Mardi Gras festival are called Krewes.  Each Mardi Gras Parade Krewe has a unique history and theme.   Some have been around for decades, while others have been in existence for just a few years.  The Krewe of Bacchus, a local group formed in 1968, holds its parade on the Sunday before Mardi Gras Day, drawing crowds of several hundred thousands every year. With more than 1,000 members and 31 animated super-floats, the Krewe of Bacchus is revered as one of the most spectacular krewes in Carnival history; their large signature floats, Rendezvous supper dance with Las Vegas-type entertainment, and national celebrity monarchs are just a few of the tradition-breaking moves that set the Krewe of Bacchus apart from he rest.  Bacchus, the Greek god of wine, has been portrayed in past Mardi Gras parades by fun-loving celebrities such as Bob Hope, William Shatner, Dick Clark, Andy Garcia, and Will Ferrell.  After their parade wraps up, the afterparty shifts over to Masquerade, the Vegas-style nightclub inside Harrah’s Casino, for a wild dance party featuring DJ Keith Scott, a mainstay on Louisiana hip-hop radio stations. 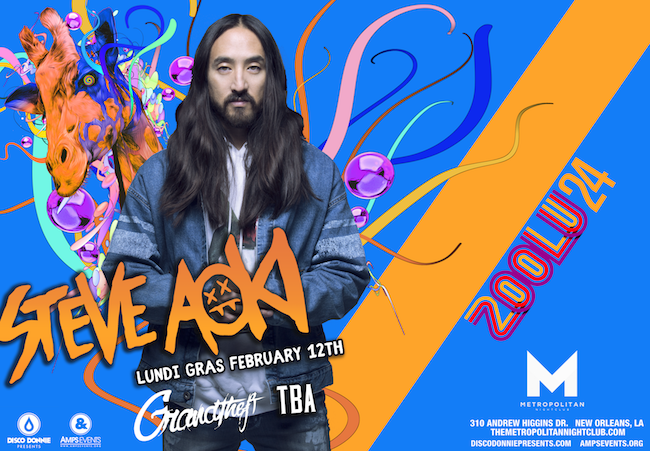 The Lundi Gras celebration is a grand New Orleans tradition embedded into the fabric of both locals’ and tourists’ traditions of honoring carnival season.  Lundi Gras represents a series of events that take place the Monday before Mardi Gras or Fat Tuesday. It has experienced a 20th century revival in New Orleans and is a must see daytime event for Mardi Gras revelers.  In the late afternoon, the Riverwalk Marketplace will host the annual Lundi Gras at Spanish Plaza with the arrival on the banks of the Mississippi River of Rex, King of Carnival; this free celebration includes fireworks and live musical entertainment.  As day turns into night, the Big Easy fireworks continue over at Metropolitan where Rex, King of Carnival yields his dominion to Aoki, King of Electronic Dance.   Brace yourself for a tough ticket but an epic time if you can squeeze your way in. 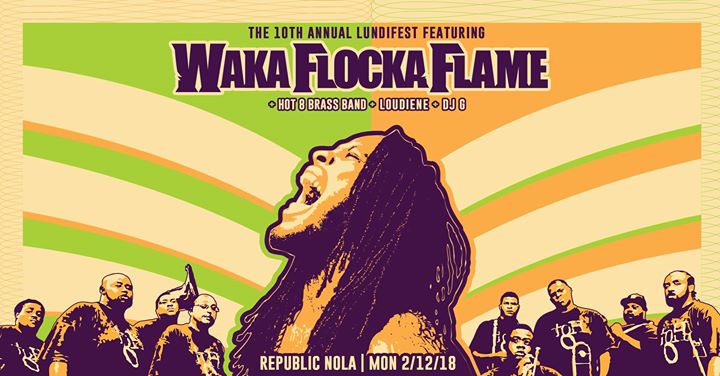 Southern hip-hop star Waka Flocka Flame, with mega-hits like “No Hands” and “Hard In The Paint” under his belt, is sure to be one of the highest energy sets in the 10-year history of the Lundifest.  In New Orleans tradition, the night will start out with brass versions of hip-hop hits by New Orleans natives The Hot 8 Brass Band.  Come early and stay late, because Republic’s long-time resident, DJ G, will be spinning top 40s and hip-hop classics before, between, and after all the live sets.  Performances will start shortly after the parades pass downtown, so watch the Orpheus parade nearby and walk right on over for another epic Lundifest. 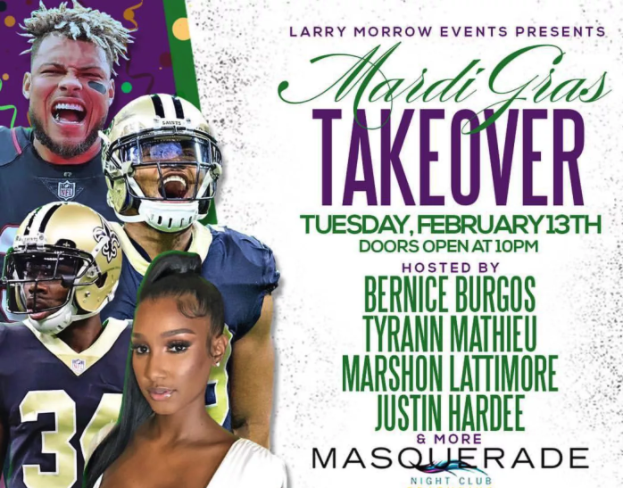 For the past hot minute, Bernice Burgos has been making quite the name for herself.  The bartender turned “urban model” turned entrepreneur (3.7M Twitter followers!) has been turning up everywhere from your favorite artist’s music video to hip-hop morning radio stations to the gossip websites, thanks to her social media beef with Tiny Harris, wife of rapper T.I. and fellow reality TV star (4.5M Twitter followers!).  OK, OK, so reality TV may not be your cup of tea…. but rest assured, Ms. B’s presence as the marquee host for Masquerade’s Mardi Gras afterparty will explain why this venue inside Harrah’s Casino will be the “it” place of the night filled with famous/not-so-famous/wannabe-famous Instagram models, hip-hop celebrities, and known athletes such as the “Honey Badger” Tyrann Mathieu (a Lousiana State University legend) and local hero (and fantasy football god) Alvin Kamara of the NFL’s New Orleans Saints.  Pony up and bottle up… because if you can’t YOLO on Mardi Gras, you probably shouldn’t YOLO ever.

More events and more venues for Mardi Gras 2018 in New Orleans can be found on the Discotech app.  Have a crazy but safe weekend, make sure to where lots of purple, green, & gold, always use the buddy system around town, and make sure to stock up on those beads! Top 3 Best Nightclubs in Sacramento in 2021